Specific to the second quarter, a total of 27,559 types of bad credit information of real estate development enterprises in China, 20.99% more than in the second quarter of 2021, and 5.96% less than in the first quarter of 2022. From the perspective of the types of bad credit information generated by development enterprises, the main information is tax arrears, accounting for more than 80%, and the rest are persons subject to enforcement for trust-breaking, administrative punishment, abnormal operation, serious illegal trust-breaking and major tax illegal information. 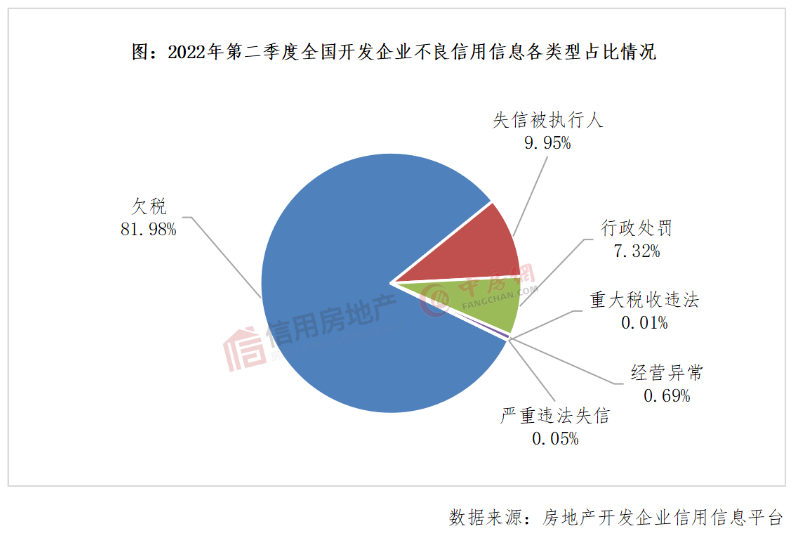 The scale of credit defaults is still growing
According to the statistics of the real estate credit platform, in the second quarter, a total of 6 real estate bond issuers in China confirmed the substantial default of domestic credit bonds or triggered cross clauses (excluding the rolloff situation), involving 21 bonds, with a year-on-year growth of 200% and a quarter-on-quarter growth of 75%; The outstanding balance of bonds involved in the default was 12.618 billion yuan, up 181.98% year on year and 29.74% month on month.
Among them, the largest balance of domestic credit bond default in the second quarter was Sunshine City, which and its parent company Fujian Sunshine Group defaulted on a total of 12 bonds, involving a balance of about 7.569 billion yuan; China Fortune and its parent company, China Fortune Foundation Holdings Co., defaulted on two bonds with an outstanding balance of 2.13 billion yuan. In addition, Beijing Hongkun Weiye Real Estate Development Co., Ltd. and Xinhualian Holdings Co., Ltd. were involved in bond defaults.
In terms of overseas bonds, in the second quarter, 12 real estate development enterprises defaulted on overseas bonds (excluding the situation of rolloff), involving 23 bonds, which was an increase from 7 enterprises defaulting on 15 bonds in the first quarter. Related defaults totaled approximately $628 million, down 50.47% from $1,268 million in the first quarter; Related debt balances totaled $6.551 billion, up 52.78% from $4.288 billion in the first quarter. Among them, Xiangsheng Holdings has the largest balance of bonds involved in overseas bond default, with one bond defaulting, involving the balance of $201 million; This was followed by Sunac China defaulting on four bonds with an outstanding balance of about $97m.
Relevant statistics show that this June to July is the peak period of real estate enterprise debt repayment, domestic real estate enterprise bond debt repayment reached the highest amount in July, 104.7 billion yuan, compared with the end of 2021 and the first half of 2022 increased significantly, the second half of 2022 will continue to face the situation of large domestic real estate enterprise bond debt repayment. At the same time, in June and July, the maturing size of real estate dollar debt ushered in a small peak. The maturity will be relatively reduced in the second half of 2022, but will increase further in early 2023. Therefore, although the supply-side support policies of the real estate industry have been gradually implemented since this year, the financing difficulties of private enterprises have not been improved, and it is generally estimated that the maturing pressure of real estate enterprises is still relatively large. 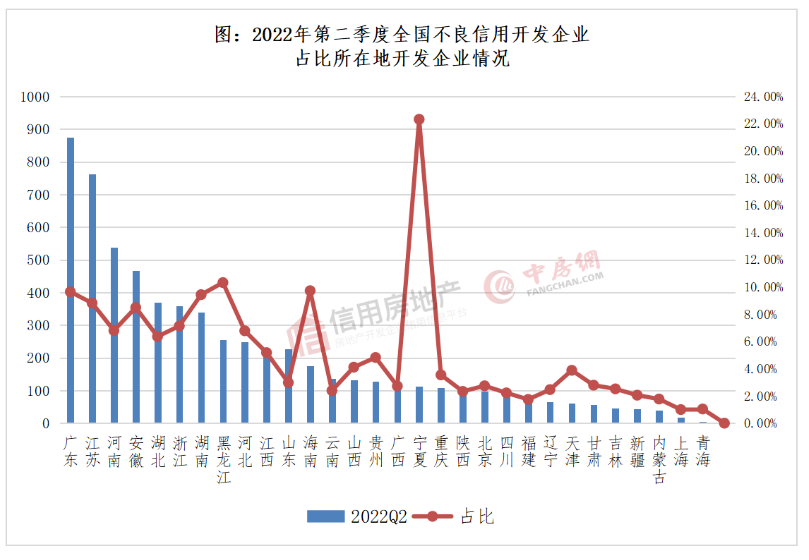 From the perspective of registration time, registered capital and other factors, enterprises involved in bad credit information in the second quarter mainly concentrated in the period of registration from 2006 to 2015, accounting for more than 50%; From the perspective of registered capital, the development enterprises with registered capital between 10 million yuan and 50 million yuan (excluding) account for the highest proportion, reaching 45.33%; At the same time, in the administrative punishment, trust-breaking enforcement and tax delinquency and other bad credit behavior, the registered capital of 10 million yuan -50 million yuan (excluding) between the development enterprises are significantly higher than other registered capital level of enterprises.
On the whole, the total number of bad credit development enterprises in the real estate industry continued to decrease in the second quarter of 2022, but the tax delinquency behavior was prominent in this quarter, and the credit status of real estate development enterprises still needs to be continuously improved. In terms of policy, the central and local governments also introduced a series of new laws and regulations in the second quarter to continue to strengthen the construction of industry credit. For example, the Opinions of the CPC Central Committee and The State Council on Accelerating the Construction of a Unified National Market were released, the Ministry of Housing and Urban-Rural Development issued the Key Points for the Construction of the Credit System of the Ministry of Housing and Urban-Rural Development in 2022, and the National Bureau of Statistics published the Credit Management Measures for Seriously Discredited Enterprises. At the same time, Shanghai, Jiangsu and other places issued the key points of social credit system construction to further promote the value and role of credit system construction in the development of market economy.